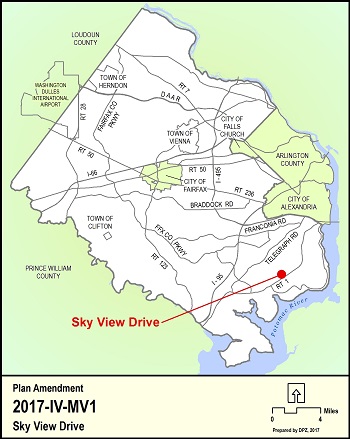 This Plan amendment evaluated the impacts of Plan language for 8419 and 8423 Sky View Drive (Tax Map Parcels # 101-3((10))6A and 7A) that would match the density of the neighboring Skyview Park subdivision (which is planned for up to 16 du/ac, but was developed at approximately 13 du/ac). The Plan Amendment was considered concurrently with a rezoning application for the subject properties. Rezoning case number RZ/FDP 2017-MV-024 was subsequently accepted, and is under concurrent review by the Zoning Evaluation Division of DPZ.