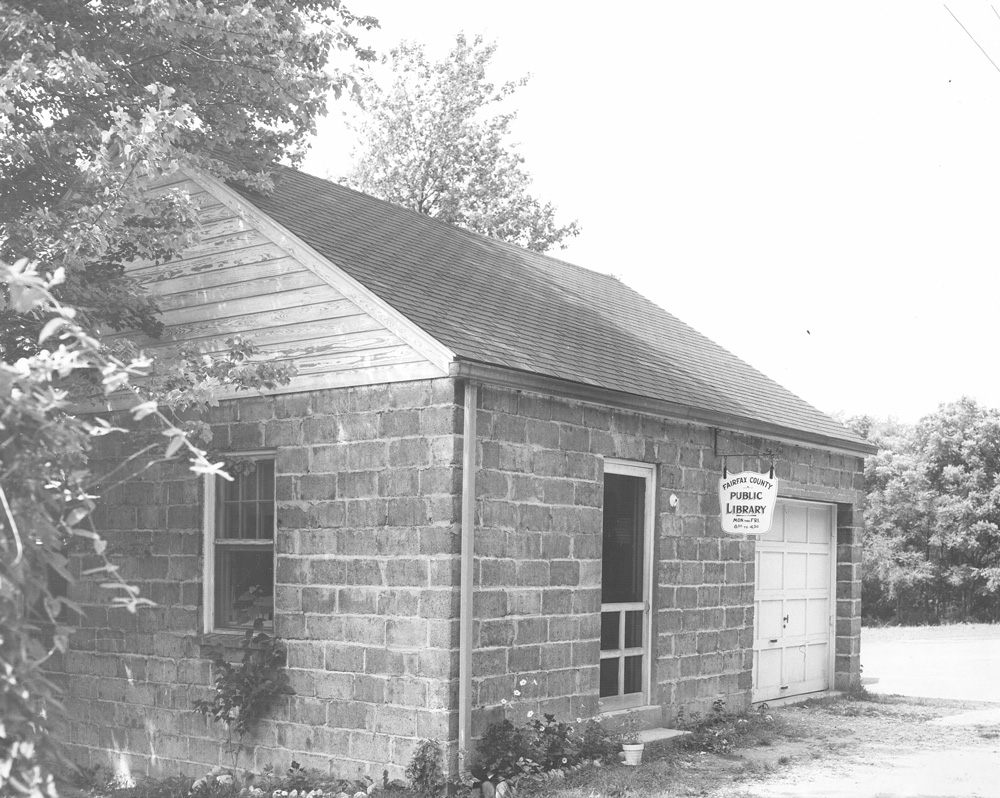 The very first library of the Fairfax County Public Library system opened in Fairfax, Virginia. It consisted of a small 14” x 24” cinderblock building at 143 Court House Drive and contained a garage for the WPA Bookmobile.

The Fairfax library building expanded with an addition completed in February 1950.

A new $680,000 library was built at 3915 Chain Bridge Road becoming the first permanent facility to be built specifically for use by Fairfax County Public Library. Called the Headquarters Library, it officially opened on July 8, 1962. Designed in the colonial spirit by Virginia architect J. Russell Bailey, AIA, it consisted of 37,800 total square feet. The original FCPL cinderblock building became the office for the Fairfax County Electrical Inspector and was razed in 1969.

Drive-in Dial-A-Book service begins on July 1, 1974. Patrons can call the Central Library for a book and pick it up at a drive-in station.

In May 1983, the library underwent renovations and temporarily relocated to the south wing of the old Fairfax County Courthouse at 4000 Chain Bridge Road.

A groundbreaking ceremony is held on September 23, 2005 for the construction of a new City of Fairfax Regional Library.

The Fairfax City Regional Library at 3915 Chain Bridge Road closes for the last time on November 25, 2007. The building is razed in summer 2010.

The current City of Fairfax Regional Library opened its doors on January 26, 2008 at 10360 North Street. Designed by David Hallett of The Lukmire Partnership, it contains 44,450 square feet. This brand new facility’s exterior and interior architecture suggest a love of history and enlightenment, from the colonial columns and dormers to the soaring yellow pine ceiling.

The Memory Depot, a DIY video and photo station opens at the City of Fairfax Regional Library on June 9, 2018.

Since 1983, the City of Fairfax Regional Library Precision Book Cart Drill Team has been marching in Fairfax City’s Independence Day Parade. The team is the oldest documented library book cart drill team in the country.

The idea originated with a former FCPL librarian, Joyce Sibley. Sibley attended a fraternity’s Homecoming parade at the College of William & Mary and observed a lawn mower precision drill team called Toro! Toro! Toro! Sibley thought it would be a hilarious idea to form a library precision book drill team for FCPL. In May 1983, the City of Fairfax Regional Library was under renovation and temporarily relocated to the south end of the old Fairfax County Courthouse. Sibley formed the drill team to participate in Fairfax City’s Independence Day Parade calling attention to the new temporary location, and it was a raging success. The drill team won 2nd place in the Novelty Unit category that year.

Since that time, the drill team has marched in almost every Independence Day parade in Fairfax as well as a few Gross National Parades in Washington, D.C. (which are no longer held). On several occasions, the team has been invited to march in the Fourth of July Parade on the National Mall, but has always put the City of Fairfax first.

At 8am on the morning of the parade, the librarians can be found in the library’s parking garage rehearsing their choreographed routines. From there, they take their place in the parade line and march their wheeled book carts, decorated with festive Fourth of July themes, through the streets of Fairfax City.

Since the team is the oldest precision book cart drill team in the country, they have trained and given advice to librarians from around the United States. The team even received national recognition as an expert in a book on book cart parade routines.