The Fairfax County Park Authority Board approved a funding request for court improvements at Lewinsville Park in McLean, VA at a board meeting on May 11, 2022. Improvements will include converting one tennis court into four dedicated pickleball courts and reconstructing the surfacing and fencing of the five remaining tennis courts and two basketball courts.

The Fairfax County Park Authority (FCPA) Board approved $650,000 in funding for court improvements at Lewinsville Park in McLean, VA.  The action was taken during the Park Board’s regular meeting on May 11, 2022. These improvements include conversion of one tennis court into four dedicated pickleball courts and reconstruction of the surfacing and fencing for the five remaining tennis courts and two basketball courts. The new court layout will fit entirely within the existing paved court and walkway area with no additional impervious surface constructed. Additionally, a drainage ditch will be installed between the courts and the garden plots to intercept storm water runoff to improve the overall functionality of the site. The approved improvements are timely as all the courts at the park require resurfacing and repair. Project completion is anticipated by late summer/early fall 2022. 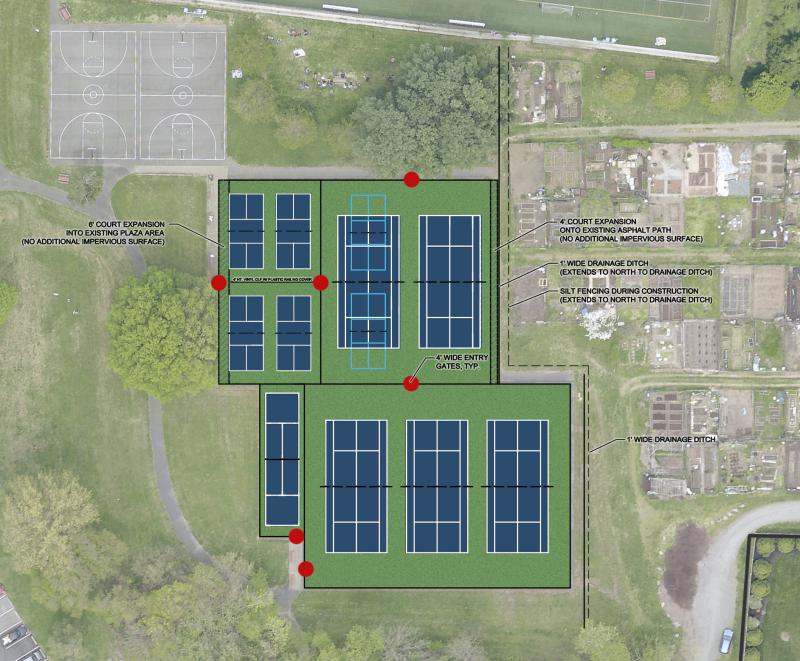 In collaboration with the Dranesville District Supervisor’s Office, the Park Authority held a virtual public meeting on December 1, 2021 and presented options for incorporating pickleball as part of the over-all needed court improvements at the park. The public meeting was followed by a 30-day public comment period. Feedback received from the community was considered in the selection of the court improvements.

The athletic court contractor, ATC, will mobilize onsite the week of June 19 to begin demolition of the existing court fencing and gates. Over the next several months, the existing surfacing will be removed with new surfacing installed. Once the new surfacing is laid, the courts will need to sit undisturbed for a period of two to four weeks to allow for the color coating to adhere properly. New fencing and nets will be installed once the color coating has set. FCPA anticipates the courts to be closed for up to four months while these renovations and repairs are made.

Questions regarding the project can be forwarded to Parkmail@fairfaxcounty.gov and this webpage will provide any updates to information on project schedule changes. For more information, please contact the Public Information Office at 703-324-8662.

Comments regarding the court improvements for Lewinsville Park can be submitted through Parkmail@fairfaxcounty.gov.