Handheld fans have a long history due to their simple construction and numerous uses. In the early 20th century, in a time before electric fans and air conditioning were standard, the functionality and usefulness of handheld fans, coupled with their shape, made them a convenient place for enterprising advertisers to promote everything from restaurants and hotels to politicians and funeral homes.

These fans would be provided at locations where people gathered on hot summer days, such as courthouses, stores and beauty parlors. One of the most common places for these fans to be distributed was churches. The fans in this picture were donated to the Park Authority in 1999 as part of a collection of items associated with the Frying Pan Meeting House. The Meeting House was built in the 1790s, and in 1984 the last remaining trustee deeded the building to the FCPA. It was added to the National Register of Historic Places in 1991.

While it might be unclear to people who today hold stick fans or folding fans, there is a particular way to grip these bell-shaped fans. The hole at the bottom is for your thumb.

These fans are made of cardstock and printed on the back is an advertisement for Frank Michelbach, Incorporated, “Home of Fine Furniture,” on King Street in Alexandria. The company took advertising seriously. Advertisements for Frank Michelbach’s business can be found from the 1920s through the 1950s in the Washington Post, LIFE magazine, and in local school yearbooks.

The fans were printed by William W. Kendrick Company, Incorporated, in Washington, DC. Remarkably, this company, which was founded in 1922, still exists. This third generation-owned business can boast of being the oldest promotional product company in the Washington, DC, area and one of the oldest in the country. 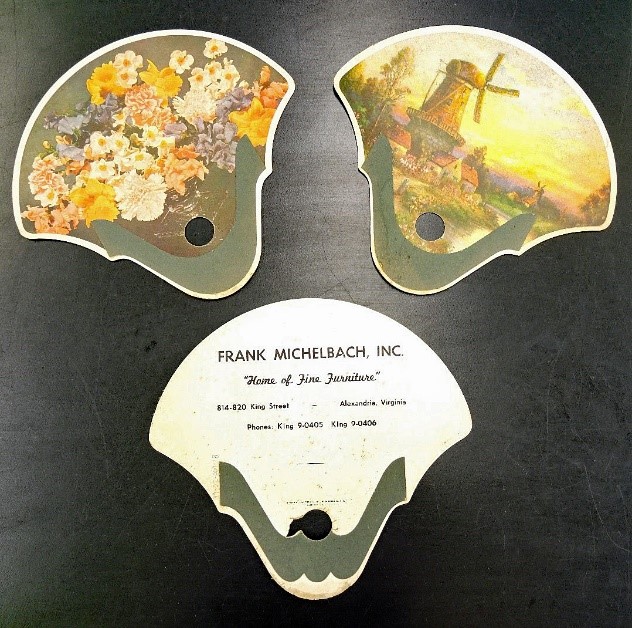