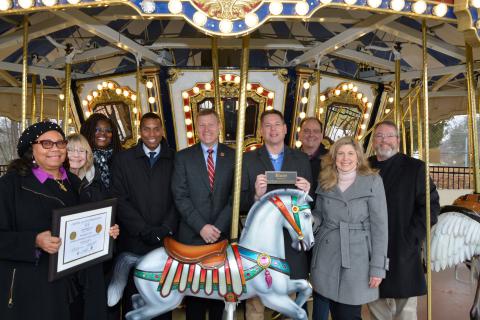 Officials thanked Transurban for its support at a ceremony on December 10, 2019, at the accessible carousel at the Lee District Family Recreation Area. Transurban was granted naming rights to one of the horses because of a donation to the Park Foundation. The sponsors fittingly named the Chessie’s Carousel horse “Elane.”

Since 2011, Transurban has donated a cumulative total $182,700 to FCPF for parks and programs located near the express lanes. Grants and charitable contributions enable the Park Authority to provide the popular Lee Nights Summer Entertainment Series, Chessie’s Big Backyard playground and programs at other parks.

A $10,000 gift to the Fairfax County Park Foundation enables the donor to name one of a limited number of Chesapeake Bay-themed Carousel features. To learn more, visit Chessie’s BIG Backyard at Lee District Park.

For more information, visit us online.