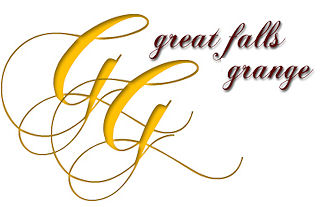 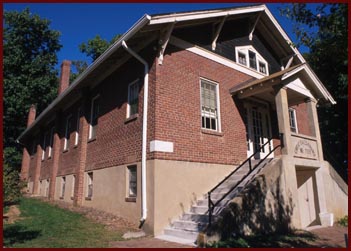 Listed on the National Register of Historic Places, this public assembly hall was built in 1929, a product of the Grange Movement which swept rural America shortly after the Civil War. The Grange was built as a symbol of commitment to community involvement and progress, and has been a meeting and special event site throughout its history.

Our largest indoor facility, the Great Falls Grange provides functional elegance. The naturally lit upper level with hardwood floor, barrel-vaulted bead board ceiling and stage is sure to please. The lower level banquet room and enormous kitchen makes it a superb setting for large events. It may be rented individually or with the adjacent Forestville Schoolhouse.

Rent the Forestville Schoolhouse with the Great Falls Grange and receive 10% off your base rental and extra hour fees.

Accessibility:
The Great Falls Grange is wheelchair accessible and has an interior lift.

Built in 1929, as Grange Hall #738 for the Great Falls chapter of the Fraternal Order of Husbandry, this Craftman's style public assembly hall has been the site of private and community gatherings throughout its life. A product of the Grange Movement that swept rural America shortly after the turn of the century, the Grange was built as a symbol of commitment to community involvement and progress.

The Grange Movement was founded by Oliver Hudson Kelley in 1867 in western New York and was an international organization by 1906. The Grange was a supporter of the women's right to vote and one of the first nongovernmental organizations to provide international assistance to those in need. The National Grange organization still exists. It is still the political voice of the American farmer, provides social activities and educational instruction for its members.

The Great Falls, then Forestville, chapter was founded in 1920. Prospective members bought "shares" into the organization. For several years, the chapter met in the loft of a local sawmill and then the Forestville Schoolhouse while they raised money for land purchase and the construction of a meeting hall. In 1929, the Grange was built for $12,500 and featured the latest in kitchen and heating equipment. It was one of five grange halls that served the dairy farming community. Dairy farming was the predominant form of agriculture in the county, and Fairfax County was the leading Virginia producer until 1933.

The spacious, naturally lit upstairs room has hardwood floors, barrel-vaulted bead board ceiling and many of the original fixtures. A raised, fully curtained stage is at one end of the room. Wood for the bead board ceiling and wainscoting is thought to come from the local sawmill. The lower level has a small office area, and a plain, but well lit meeting room with a pass-through to the large country kitchen from which dinners at community socials would be served. Built-in glass fronted cabinets flank either side of the pass-through. The Grange was the focal point for all community life, hosting ice cream socials, dances, carnivals, theatrical productions and other special events.

With declining membership and the dairy farms giving way to suburban development, the Grange and its grounds were sold to the Park Authority in 1981.

The Great Falls Grange is the last standing unaltered grange hall in Virginia and is listed on the Fairfax County Inventory of Historic Sites, with the Virginia Department of Historic Resources and on the National Register of Historic Places.