The U.S. Environmental Protection Agency (EPA) Office of Research and Development (ORD) and the Centers for Disease Control and Prevention (CDC) Agency for Toxic Substances and Disease Registry (ATSDR) have worked collaboratively to complete the research activities on synthetic turf playing fields under the “Federal Research Action Plan on Recycled Tire Crumb Used on Playing Fields and Playgrounds.”

This report (Part 1) summarizes the research effort to characterize tire crumb rubber, which includes characterizing the components of, and emissions from, recycled tire crumb rubber. The exposure characterization report (Part 2) will summarize the potential exposures that may be experienced by users of synthetic turf playing fields with recycled tire crumb rubber infill, such as how people come in contact with the materials, how often and for how long. Part 2 will be released at a later date, along with results from a planned biomonitoring study conducted by CDC/ATSDR.

This report by the Washington State Department of Health concluded that athletes exposed to crumb rubber turf fields showed no increased risk for cancer compared to the general population.

Fairfax County will continue our proactive engagement of our state and federal partners in ongoing research efforts, as well as monitor new research on crumb rubber and keep you informed of any developments.

The county's decision to allow use of crumb rubber as infill for synthetic turf fields is based on extensive review of scientific papers conducted by state and national organizations over the last decade. To further our understanding about exposures to users of these fields, the county has requested additional studies be made by appropriate federal agencies and include county involvement, if possible.
Update on Synthetic Turf Fields (02/02/17)
Update of County Actions to Date Regarding Synthetic Turf Fields (05/03/16)
Synthetic Turf Fields Health Studies Memo (06/17/15)
Synthetic Turf Field Studies & Reports 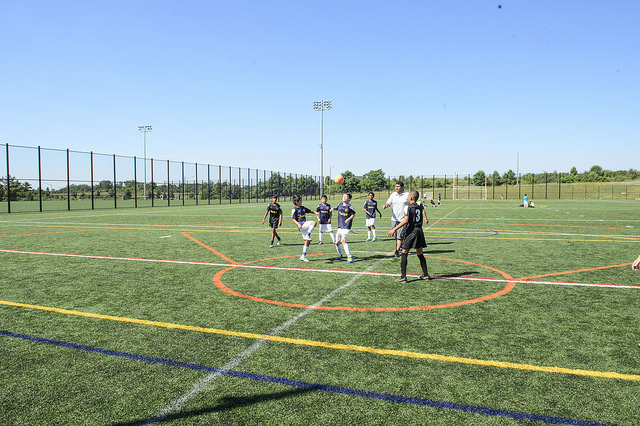 As directed jointly by the Fairfax County Board of Supervisors and the Fairfax County School Board, this report reflects the results of research, analysis, and discussions contributing to recommendations for development, ongoing maintenance, and eventual replacement requirements for synthetic turf fields.

In response to renewed concerns by community members, the Health Department conducted another extensive review of the scientific literature related to the potential health effects from the use of these fields. No new findings showing a link between crumb rubber and any health risk were identified, and available information concluded that the use of synthetic turf in athletic fields remains safe.

Why is synthetic turf used in Fairfax County?

Starting in the early 2000’s the Park Authority along with other organizations in the County that provide athletic facilities began looking at alternatives to natural turf fields to meet the growing demand for use of athletic fields throughout the County. Synthetic turf is a man-made product and is mostly installed in fields that are heavily used. Synthetic turf fields are used in Fairfax County because they:

What are synthetic turf fields made of?

The crumb rubber used in synthetic turf is mainly composed of recycled tires, which contain man-made and natural rubber. Based on the review of research studies and reports, certain chemicals have been identified in crumb rubber. These include small amounts of polycyclic aromatic hydrocarbons (PAHs), volatile organic compounds (VOCs) and heavy metals such as zinc, iron, manganese and lead.

What are synthetic turf fields made of?

The crumb rubber used in synthetic turf is mainly composed of recycled tires, which contain man-made and natural rubber. Based on the review of research studies and reports, certain chemicals have been identified in crumb rubber. These include small amounts of polycyclic aromatic hydrocarbons (PAHs), volatile organic compounds (VOCs) and heavy metals such as zinc, iron, manganese and lead.

To date, studies on the release of chemicals from crumb rubber have reported very low concentration of chemical exposure. Although the potential for health effects due to exposure to chemicals in crumb rubber is very low, there are three possible ways for people to have contact with these chemicals on artificial turf fields:

Are any health effects associated with these chemicals found in synthetic turf crumb rubber?

The health and safety aspects of synthetic turf have been reviewed and addressed by many national and state organizations, including the U.S. Environmental Protection Agency, the Centers for Disease Control and Prevention, and numerous state agencies in California, Connecticut, New Jersey, and New York.  They generally conclude that health effects are unlikely from exposure to the levels of chemicals found in synthetic turf and that these fields do not pose a serious public health concern. Specifically, a review of the available information on crumb rubber by the New York Department of Health indicates that ingestion, dermal, or inhalation exposures to chemicals in or released from crumb rubber do not pose a significant public health concern.

A multi-agency report from the State of Connecticut concluded that the use of outdoor and indoor artificial turf fields is not associated with elevated health risk. Studies and reviews conducted by the California Office of Environmental Health Hazard Assessment found that synthetic turf fields do not represent a serious human health risk with regard to the inhalation of chemicals or particulates above these fields. These studies indicate that at much higher levels, these chemicals can cause serious health effects. Some PAHs may pose a cancer risk for people exposed to high levels for long periods. VOCs can cause eye, nose, throat, and skin irritation. In young children, exposure to lead may cause learning and behavioral problems and lowered intelligence.

Can people be exposed to these chemicals from other sources?

The PAHs and VOCs found in crumb rubber are very common in the urban environment. People can be exposed by breathing or eating or by getting dirt or dust on their skin. Rubber dust from car tires is a source of urban air pollution and soil pollution. PAHs are present in exhaust, smoke, soot, urban soil and char-broiled foods. VOCs are released into the air from gasoline, paint, building materials and many other sources. Lead is commonly found in soil and dust in the urban environment because, in the past, it was used in paint, gasoline and many other products.

Does the heat generated by synthetic turf pose a health risk to users?

Like asphalt, the crumb rubber in synthetic turf fields absorbs heat from the sun and gets hotter than dirt or natural grass. On hot days, some synthetic turf fields may be too hot to play on. To protect yourself from the heat, health officials have recommended that you take the following precautions: drink lots of water, wear light and loose fitting clothes, always wear shoes, take breaks often, and exercise moderately. If you experience symptoms of heat related illness, such as dizziness, weakness, headache, nausea, vomiting or muscle cramps, move to a shaded area, drink water and rest. Seek medical attention if you do not feel better. It is especially important that adults supervising children take precautions on hot days.

Are people who play on synthetic turf fields at risk of bacterial skin infections?

MRSA has not been proven to be caused by synthetic turf field contact. Bacterial skin infections among athletes are due mainly to physical contact and sharing contaminated towels or sports equipment. Coaches and players should be aware of the potential for MRSA transmission and infection among athletes. All skin cuts or abrasions should be washed with soap and water and covered immediately. School athletic departments and sports leagues, should use good hygienic practices and prohibit the sharing of towels and equipment that rubs against bare skin.

Should people continue to use synthetic turf fields with crumb rubber?

Regular physical activity is one of the most important parts of a healthy lifestyle. Synthetic turf fields allow access to open spaces for sports and physical activities. After any outdoor activity health organizations recommend that people should wash their hands before eating or drinking. On very hot days, users should limit activities, take rest breaks and drink water.

What preventive measures can be taken to further reduce potential health and safety concerns of synthetic turf fields?

Hand-washing after using the field, especially before eating; discouraging eating while on the field; and monitoring for potential heat-related illness are recommended measures for minimizing potential risks associated with synthetic turf fields.

The following links provide additional information and details on the health assessment of synthetic turf fields: