The Colchester Archaeological Research Team discovered this meter-long door hinge with hand-wrought nails near a stone wall foundation at the Old Colchester Park and Preserve. This artifact and others associated with the wall's foundation indicate the structure was occupied in the 18th century. Colchester operated as a tobacco inspection station and port town from 1753 until about 1820 when its port silted in and commerce shifted to Alexandria. This building is likely the one depicted on French General Rochambeau's map, Camp a Colchester, created en route to the Battle of Yorktown during the American Revolution. The hand-wrought nails are typical for 18th century (and earlier) architectural and structural elements. 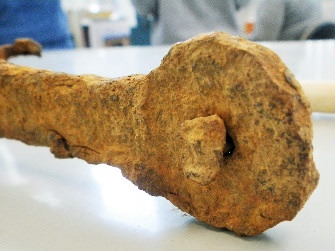 This large hinge could be for a door for a bulkhead entrance into the cellar of the stone foundation or for a large door on a first floor area that fell into the cellar next to the stone foundation when the building was abandoned in the late 1700s or early 1800s. Check out other information about artifacts and current excavations around Fairfax County at cartarchaeology.wordpress.com.