The tradition of baking holiday cookies to share with friends and family dates to the medieval era. Historically, these cookies would be made with fragrant spices such as black pepper, ginger and cinnamon, making them taste similar to modern day gingerbread. The creation of gingerbread men cookies is attributed to Queen Elizabeth I. It is said that she presented visiting foreign officials with gingerbread in their likeness. Other forms of gingerbread, such as loaves and houses, have historical ties as well. It is believed that gingerbread houses were popularized by the witch’s cottage from the fairytale Hansel and Gretel. In America, George Washington’s mother, Mary Ball Washington, was known for her gingerbread loaf recipe, which was her hospitality staple. Her recipe called for spices such as ginger, cinnamon, mace and nutmeg, with a surprise hint of citrus from some orange zest.

These cookie cutters are part of Fairfax County’s Lahey Lost Valley Collection. In 1940, Richard Lahey and his wife Carlotta Gonzales Lahey bought 45 acres of land in Vienna. Richard Lahey was at one time the principal emeritus of the Corcoran School of Art and a well-respected artist and teacher. Carlotta was a painter, sculptor and teacher. Throughout their lives, they collected historic furniture, folk art and antiques. Carlotta bequeathed 22 acres of land, a house and its contents to the Fairfax County Park Authority in memory of Richard.

The tin cookie cutters in the Lahey Lost Valley Collection offer a unique spin on the standard gingerbread man pose. The assortment includes a depiction of a trumpeter on horseback, a man wearing a top hat, and a dove. They would have been used to cut a variety of cakes and cookies, including gingerbread. Generally, the more intricate the design of a tin cookie cutter, the more desirable and collectible it has become. The only major design difference to modern cookie cutters is the lack of a handle. Vintage cookie cutters have holes cut in the back of the mold to allow your fingers to push away the dough and lift the cutter. While cookie cutter designs and materials may change, the excitement of partaking in a family tradition, such as making gingerbread, never will. 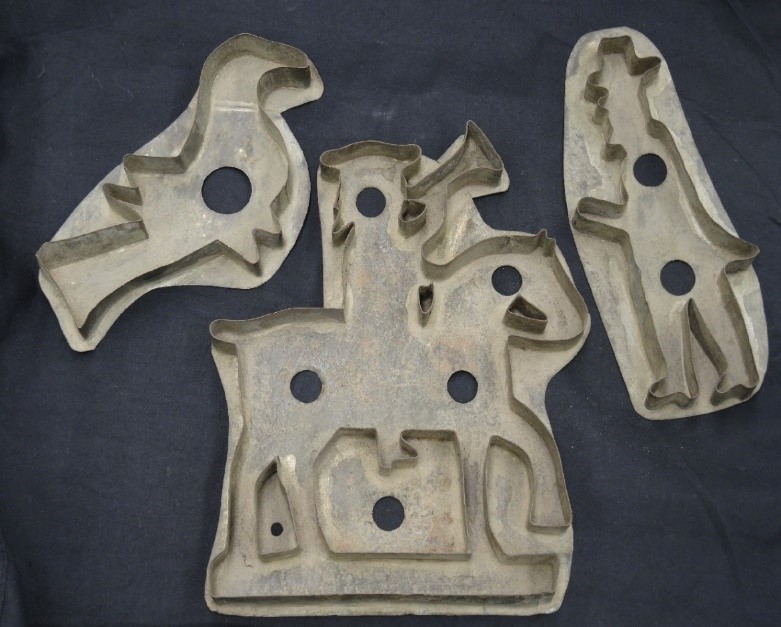