The Curious Tales of a Jacket with No Tail

This ladies’ spencer was found in a closet at the home of a Lee family descendant and, according to the donor, the family had used it as a dress-up and costume piece for decades. It was donated to the Fairfax County Park Authority in 1994.

The garment was conserved and stabilized in 2012 due to its fragility. It was analyzed at that time and was dated to around 1820. The outer fabric is mauve silk with a woven pattern of vines and leaves. The neckline, which is U-shaped in the front and V-shaped in the back, is trimmed with a wide, pleated and ruched band. The inner lining of the spencer is a mixture of beige linen for the bodice and wool for the sleeves. It is fully handstitched.

The spencer, a waist-length jacket with no tails, is a unique clothing item from the Regency Era. Its creation is credited to George John Spencer, 2nd Earl Spencer (1758-1834), though there are many versions of the origin story. 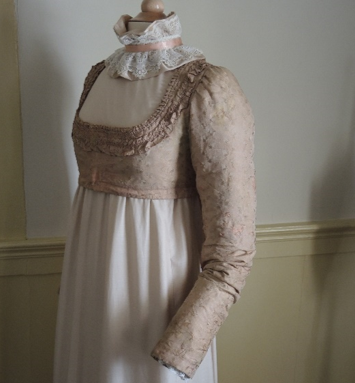 One claims Spencer brought his jacket to a tailor and had the tails removed because he discovered they had been burned by coals when he stood with his back too close to a fire. Another says he was tired of his tails getting caught on brambles while hunting and cut them off himself. A third version attributes its creation to a bet – the Earl of Spencer declaring that he could create a nonsensical piece of clothing and make it the height of fashion. Whatever its origin, it soon became a popular men’s style. Shortly thereafter, it was adopted as a women’s fashion style that became popular on both sides of the Atlantic.