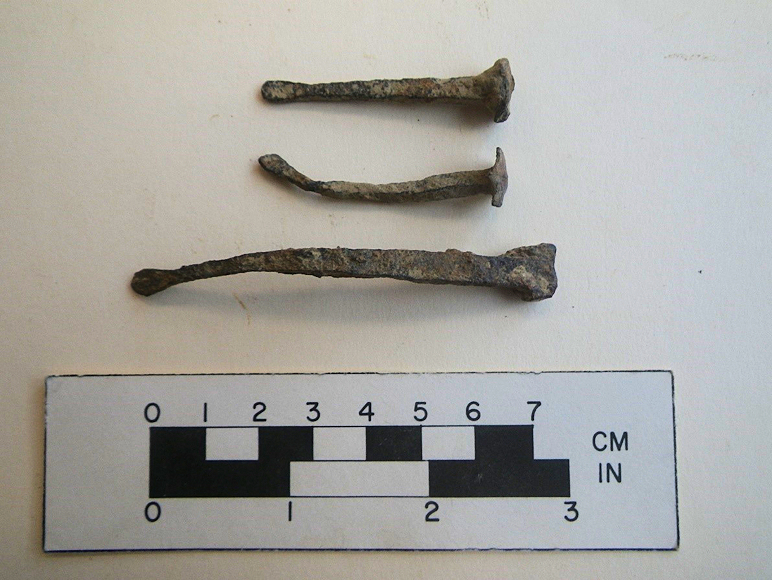 Nails used today for building are clean-cut, uniform, and round in cross-section. This was not the case in Early America. From their earliest use through the 18th century, all nails were hand-wrought. Blacksmiths created wrought nails individually from a square iron stock rod. To make a nail, the blacksmith would heat the rod until it was red hot and malleable, then the process of shaping the nail could begin. The blacksmith hammered the heated rod on all four sides to make a point, and then cut it to the desired length. The head of the nail could be formed into any of a variety of different shapes depending on the nail’s intended use and the time period in which it was produced. The resulting product tapered on all four sides, one of the defining characteristics of a wrought nail. In the late 1790s, machines were invented that cut nails from sheets of plate iron in a cookie cutter manner. Unlike wrought nails, machine-cut nails taper on only two sides while the other opposing sides remain a constant thickness, that of the iron sheet from which the nails were cut. The processes to extrude the wire nails common today were not developed until the end of the 19th century.

Knowing the different styles of wrought nails helps archaeologists identify the time period when certain nails were made, even if there is very little of the nail left. Likewise, the size of the nail, its head shape, and the shape of the tip can indicate the nail’s intended use. For example, a farrier’s nails would be different from nails used to join boards, which differ in form from flooring nails intended to be set flush with a countersink.

For more information about artifacts and current excavations around Fairfax County, see the archaeology blog at cartarchaeology.wordpress.com.

Photo: Examples of hand-wrought nails recovered from an archaeological site in Fairfax County.