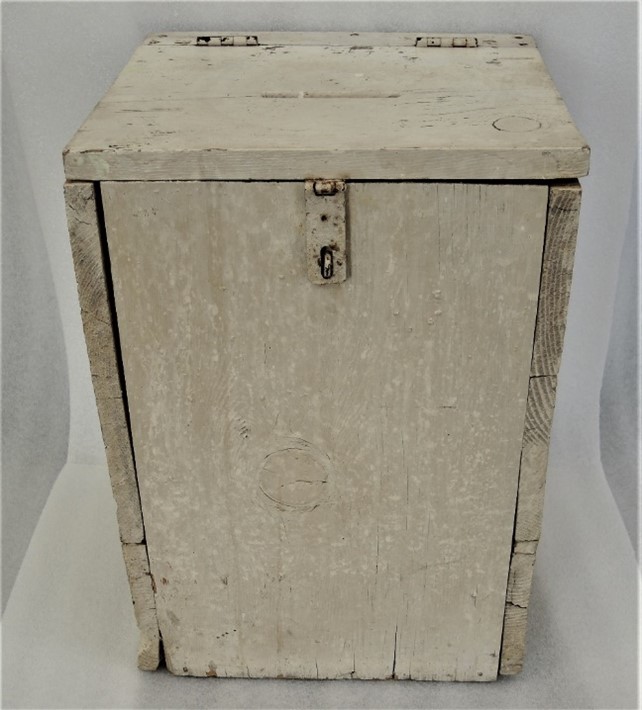 When America was founded, there was no expectation of privacy in voting. The voter’s choice, along with their name and address, were recorded into polling books as they voted viva voce, or by voice.

Although this system eventually faded away as voting by paper ballot became popular, there was still no real secrecy. Ballots were provided by parties, color-coded, and often placed into a glass jar. Members of each party would send scouts to monitor the polls and could influence the outcome of the election using fraud, coercion, intimidation and violence. As voting rights expanded and more citizens could vote, public voting gave way to what reformers called the “Australian ballot” or secret ballot system.

This ballot box was donated to the Fairfax County Park Authority in 1985. The donor said it was used in the 1920s and 1930s in the Pleasant Valley precinct of the Dranesville District. Her father ran a store on Route 50 known as Rector’s Store, and the ballot box would be placed in the store during elections. In later years, she said the ballot box was placed in their home, and the Elections Office would bring a new lock for the box prior to the polls opening in the morning. The donor recalled that her mother was the local registrar of voters and would invite people over for lunch, croquet and voting on Election Day.

This information tracks with the history of voting in Virginia. While bigger cities had begun to explore voting by machine as early as 1888, the first-time voting machines were used in a Virginia election was not until a primary held on August 1, 1950, in Arlington County. Prior to this, all voting in Virginia was done with paper ballots which were hand-counted by election personnel. Many smaller precincts did not have municipal buildings, so local voting was carried out in neighborhood stores and in some cases, private residences. To this day, some states still allow homes to be designated polling places, especially in remote areas.

In further corroboration of the donor’s memories, when women gained the right to vote, they also became involved in the administration of elections. Fairfax Circuit Court records show women employed as registrars in Fairfax County voting precincts beginning in 1920, the year the 19th Amendment was ratified.

The history of this ballot box is an illustration of how voting has changed over the years for Virginians.