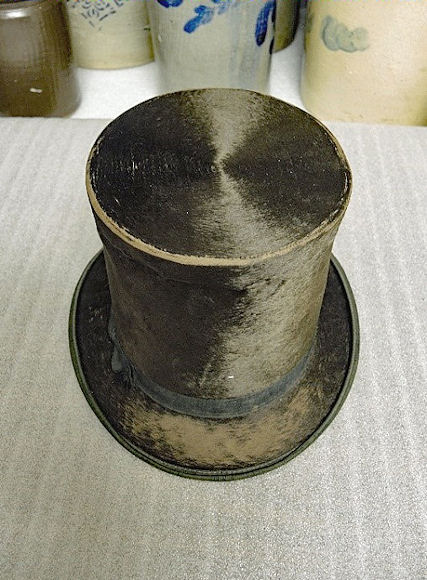 Occasionally on display at Sully Historic Site, this silk top hat is said to have belonged to Mr. Jacob Haight, a 19th century owner of Sully. According to family lore, he wore the hat to President Abraham Lincoln’s first inauguration in 1861. If this family story is indeed true, Jacob Haight would not have been the only man wearing a silk top hat to Lincoln’s inauguration. Images of the 1861 inauguration attest to the popularity of silk top hats.

These hats were very popular during the mid to late 19th century and were a favorite of President Lincoln. Besides silk, felted beaver fur, which was waterproof and therefore highly desirable, was also used. However, felted beaver was used so heavily in the construction of these hats that the North American beaver population was severely affected. Due to the lack of supply of beaver fur, silk would become the standard material for tops hats into the 20th century.

This hat was purchased from Ker & Green, Hatters and Furriers, whose business was located in Washington, D.C. Their advertisement in the 1877 Boyd’s Directory of the District of Columbia proclaims, “All the Latest Styles received as soon as issued. Fine Assortment of Ladies’ Dress Furs. Largest Assortment of Umbrellas and Canes in the city.”

Haight was a Quaker originally from New York, where he worked as a farmer. With an interest in the milder climate of Virginia and hoping to buy prosperous agricultural land, he moved his family to Sully in 1842. Because of their northern origins, the Haights worried during the Civil War that they would be targeted as Union sympathizers. Because of this, both Jacob Haight’s son and son-in-law left Sully, staying in Union occupied territory in order to avoid the Confederate Army.