Someone Lost Their Marbles, Literally! 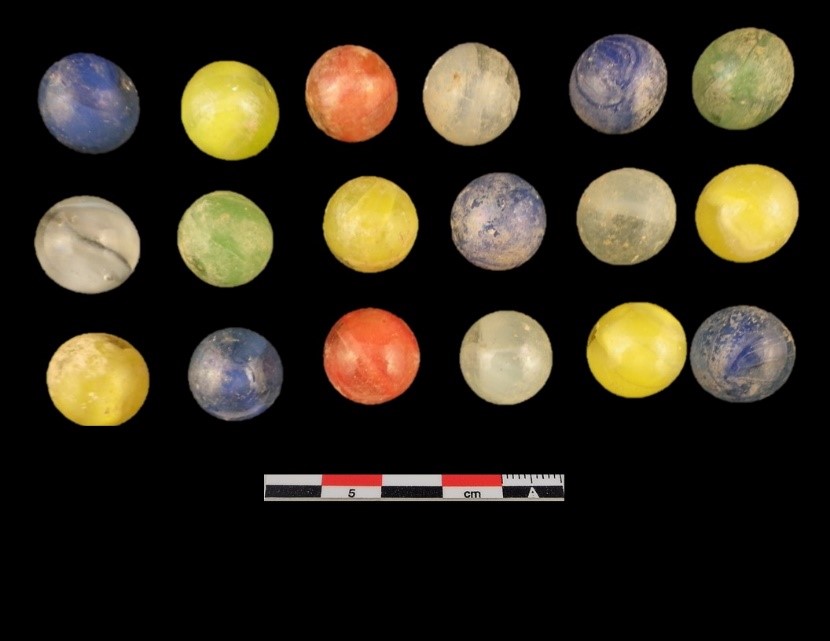 In 2014, archaeologists from the Fairfax County Park Authority’s (FCPA) Archaeology and Collections Branch conducted excavations in and around the Ash Grove meat house and made an unexpected discovery – marbles.

Ash Grove is an important link in the history of Fairfax County. Bryan Fairfax, a member of the family for whom the county was named, built the manor at Ash Grove around 1790. Unfortunately, some of the hand-hewn wooden framework at the meat house had rotted, potentially endangering the structure. FCPA carpenters, working under the direction of an FCPA architectural historian, devised historically accurate ways to save and preserve this significant aspect of the historic Ash Grove landscape.

Since the needed repairs had the potential to disturb intact archaeological deposits, FCPA archaeologists conducted excavations in advance of the preservation project. Exterior excavations provided information on when the meat house was first constructed and how. Inside the meat house, archaeologists had to document and remove the brick floor. Though attractive, the floor was not original and had been installed in the early- or mid-twentieth century. It was likely added for aesthetic purposes and to give a more “historic” look, but the porous brick retained moisture that helped to rot the framing, endangering the building.

Immediately below the brick, archaeologists found a thick layer of sand that was used to raise the historic floor to grade and to level the overlying brick. Within this layer, archaeologists discovered the cache of glass marbles.

Glass marbles date back to the 1800s. By the early twentieth century, American factories devised ways to mechanically create marbles that might include colorful patters and swirls. Though an ancient game, the period between the 1920s and 1930s is considered by enthusiasts to be the heyday of marble production and play.

We cannot say whether the marbles at Ash Grove had simply been discarded or if they had been intentionally stashed below the brick as a sort of hiding spot, abandoned and forgotten until their discovery nearly 100 years later. Regardless, the find provides some insight into the world of a population frequently overlooked in history and difficult to identify within the archaeological record -- children. Children leave little in the written record about themselves, and their activities are often seen as historically unimportant. This recovery allows parts of the mosaic that is the history of Ash Grove to be filled.