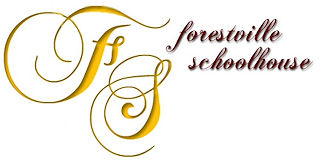 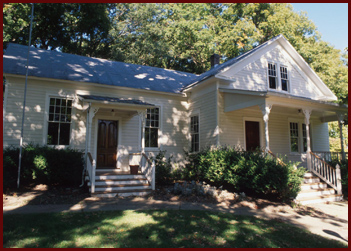 This site, listed on the National Register of Historic Places, dates back to 1889. It was originally a one-room schoolhouse, but in 1911 it doubled in size when the Floris Elementary Schoolhouse was moved from its location in what is now Frying Pan Park and attached to the west side of the building. Over the years, the schoolhouse has served as a school, junior Grange, library, bank, post office and private residence.

The schoolhouse offers large sunlit rooms with hardwood floors. It may be rented individually or with the adjacent Great Falls Grange.

Rent the Great Falls Grange with the Forestville Schoolhouse and receive 10% off your base rental and extra hour fees.

Amenities:
Hardwood floors
Pantry area with sink and counter space
Piano (it can be tuned for your event for an additional fee)
Ceiling fans in gathering rooms (NO air conditioning)
Baseboard heat

With population growing in the latter part of the 19th century, the residents of the Dranesville District petitioned for a school to be built on Georgetown Pike. In October 1889, George and Alice Gunnell sold one acre of land to the School Trustees of the Dranesville Districts for $50 to be used for the school site. Development of the wooded site began immediately and the one-room, wood stove heated, Forestville Schoolhouse opened in November, 1889. The first and longest serving of the school teachers was Henry Cornwell, who had been the Forestville post master from 1891 to 1895. It was said that Mr. Cornwell taught "to the tune of the hickory stick."

In 1911, the Floris Elementary School building was dismantled, moved from its Frying Pan location and added to the west side of the original schoolhouse. Another teacher was hired to teach the first through third grades in the new addition and Mr. Cornwell taught the fourth through seventh grades in the original section of the building. There was no plumbing in the schoolhouse. Water was carried from wells across Georgetown Pike and in 1914 or 1915, two outhouses were finally constructed.

Another Forestville School was built in 1922 to replace the smaller structure. From 1923 to 1950, the original school served as a residence. The Great Falls Grange members bought the schoolhouse in 1951 to serve as a "junior" Grange and Boy Scout meeting hall. In 1953, the building briefly served again as a school, handling the overflow from the Forestville School. From 1958 to 1966, Great Falls Realty retained offices in the east section; the west section served as the post office and then public library for the community. The last tenant was the United Virginia Bank, who vacated the building in 1981.