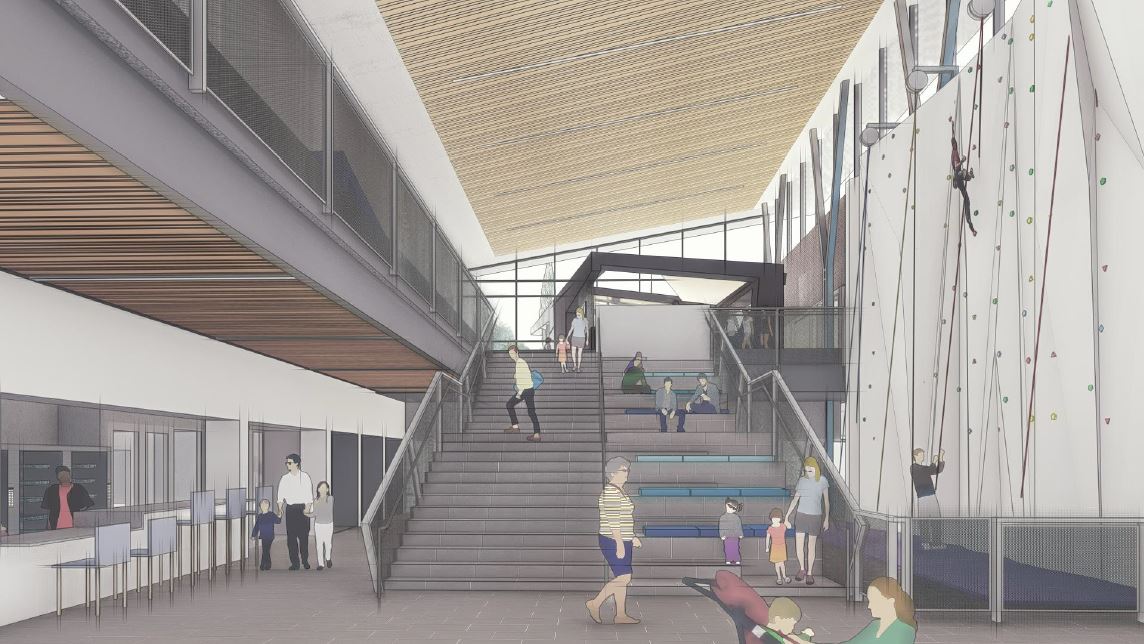 Update on the Project

The Mount Vernon Rec Center (MVRC) Renovation project was bid in the summer of 2021, but due to pandemic-related price increases the budget was exceeded and the construction contract was not awarded. In March 2022, the Park Authority Board approved a staff recommendation that due to the ongoing supply chain issues adversely affecting proposed phasing, as well as the condition of the existing facility, a full closure to the Rec Center would be necessary for construction. This will allow for the quickest and most cost-effective way to provide the new facility and services to the community. It is anticipated that the MVRC will close beginning in early 2023 and reopen in January 2025.

The Park Authority hosted an information briefing on the MVRC renovation project on Wednesday, May 4, 2022. The briefing was held at Bucknell Elementary School cafeteria located at 6925 University Drive, Alexandria, Virginia.
More Info

In spring 2014, FCPA hired Hughes Group Architects to perform an existing building assessment. In October 2014, Hughes Group Architects issued the Facility Condition Assessment and Life Cycle Cost Analysis report. This report identified building system deficiencies as well as building program and layout deficiencies. It was determined that a needs assessment and feasibility study was required to determine the future program of the Rec Center and to make sure that the future program benefits the future building financial model as well as benefits the entire FCPA Rec Center system financial model. The future program will need to be incorporated into the building to function and operate efficiently and address the current program and layout deficiencies.

In Summer 2015, FCPA hired Hughes Group Architects to perform a Feasibility Study for the renovation and expansion of the Mt Vernon Rec Center. In July 2016, Hughes Group Architects issued the Feasibility Study report. This report documented the needs assessment and feasibility study to determine the future program of the Rec Center and made sure that the future program will benefit the future building financial model as well as benefit the entire FCPA Rec Center system financial model. The future program generated will be incorporated into the building to function and operate efficiently and address the current program and layout deficiencies.  It was determined based on the outcome of the feasibility study that in addition to the core building renovations and existing building lifecycle upgrades, that a fitness addition including more multipurpose rooms will be necessary to meet the desired needs.  The facility would also greatly benefit from an additional NHL ice rink and an additional Leisure pool with additional swim lanes.

The 2016 and 2020 Park Bonds were approved by the voters for construction of the Rec Center Renovation and Expansion as recommended in the Feasibility Study.  Park Authority staff in partnership with the Fairfax County Department of Public Works Building Design and Construction Division are working as a team to advance the project design. The architectural firm of Ritter Norton Architects was selected to design the Core Renovation and Expansion project. Design of the second sheet of ice will be completed as part of the Rec Center Renovation and Expansion design. The design of the project started in July of 2017. The project milestone schedule is below. Meetings were held with the public and documents related to those meetings can be found below.

We will update this project web page throughout the process. For additional information, please contact Eric Inman at eric.inman@fairfaxcounty.gov.