Some Fairfax County Park Authority parks have lakes. Several dams were built for flood control, most of them in the Pohick Creek watershed, between 1970 and 1985. The Park Authority does not own all of the Pohick watershed lakes, and Lakes Barton and Braddock are privately owned. The dams have helped mitigate downstream flood damage and have improved water quality, wildlife habitat, and recreation.

Many of the lakes are surrounded by woods and offer good hiking. Most of the Pohick Watershed lakes are fishable. Generally, they hold a standard mix of bass, sunfish, crappie, carp and catfish and are average fisheries. They occasionally produce large catfish and good-sized largemouth bass, and they can be good places to dangle worms for small bluegill. Housing backs up to them in several places, so be sure to stay on public land.

Hiking paths encircle some lakes. Generally, the waters are easily reachable. Shoreline access may be limited in summer by flora. Small craft, like canoes, are legal, but gas motors are not.

In May 2015, Fairfax County, the Northern Virginia Soil and Water Conservation District, and USDA's Natural Resources Conservation Service celebrated the completion of four joint dam rehabilitation projects in the Pohick Creek Watershed. (Photos on Flickr) The project at Royal Lake was completed in 2009, Woodglen Lake in 2010, Lake Barton in 2011, and Huntsman Lake in 2014. Huntsman was dredged in 2014 and Woodglen was dredged in 2015. These flood control dams in the 23,000-acre Pohick Creek Watershed were upgraded to meet Virginia Dam Safety standards to protect people and property downstream. The lakes trap sediment and likely will need dredging about every seven to ten years. Because of the rehabilitation project, future dredging will require only a partial drawdown instead of complete draining of the lakes.

Learn more about the Dredging Project: 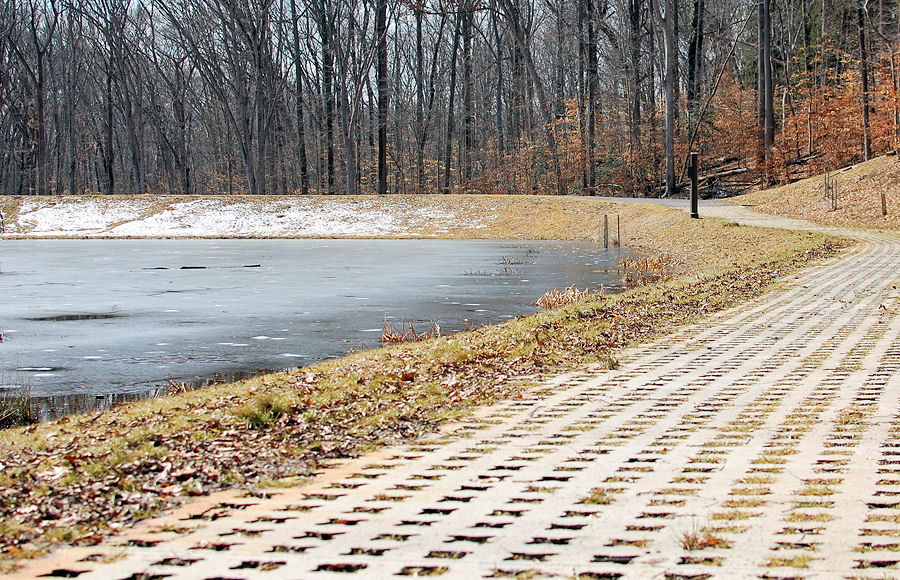 Brookfield really can be called a cute park. It’s a 25-acre site surrounding a one-acre pond that drains a 49-acre area. The park’s main entrance is at the corner of Floyd and Dickinson Streets in Springfield. There’s parking for a dozen or so vehicles in an environment-friendly lot of porous pavement. Within the park are hiking trails, a rentable picnic shelter with about 15 tables, a few other picnic tables and benches, a playground, a basketball court, a pair of b-b-q grills, and a couple of trash cans. Although juvenile bass, bluegill, redear sunfish and crappie were transferred to Brookfield Pond in 2015 for water quality purposes as part of a fish save prior to a planned dredging at Royal Lake, there is no fishing at Brookfield.

There is a loop trail around the lake just shy of a half-mile in length. Its surface varies from paved to permeable to natural. One small natural-surface section on the upper end of the lake is steep. The adventurous can bushwack their way along a primitive trail from Brookfield Park to the Accotink Stream Valley section of the Cross County Trail.

The pond was rebuilt in 2015 to meet present day standards for stormwater detention and water quality. The Brookfield Pond restoration included reconstruction of the dam and outlet structure, parking lot improvements, installation of wetland forebays and other efforts. The forebays can easily be seen at the upper end of the lake. They are formed by low rows of rocks placed where the creek flows into the pond. The bays collect and filter pollutants and sediment. The plants on rafts in the middle of the pond are floating wetlands of native and aquatic plants that increase pollutant removal. 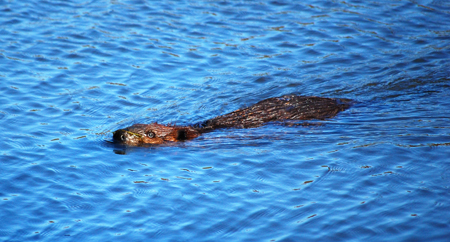 Huntsman is a 110-acre park in the south central part of the county not far off the Fairfax County Parkway and relatively close to South Run RECenter. Huntsman Road bisects the park. The park includes a 28.6 acre lake that drains 2.3 square miles.

The wooded park is a popular neighborhood destination. There is limited street parking on the north side of the lake, and the waters here are mostly lined by forest. The Dorothy Lane entrance on the south side of the lake has limited street parking, basketball courts, picnicking, a playground and a paved network of trails. It is a walk of a few hundred yards from this park area to the lake. Although there are trails in the area, there is no loop trail on parkland around the lake. There are no restroom facilities. Beaver, turtles, heron and other birds are common sightings.

The maintenance access roads on the north side of the lake are behind locked gates, so the lake is not accessible to towed boats. Small boats, such as canoes, are legal, but they must be carried or wheeled by hand to lakeside. Huntsman Lake was drained in 2014 for dredging and structural work and then restocked with fingerlings in fall 2014 and summer 2015. Details of the Huntsman rehabilitation project are on our blog. 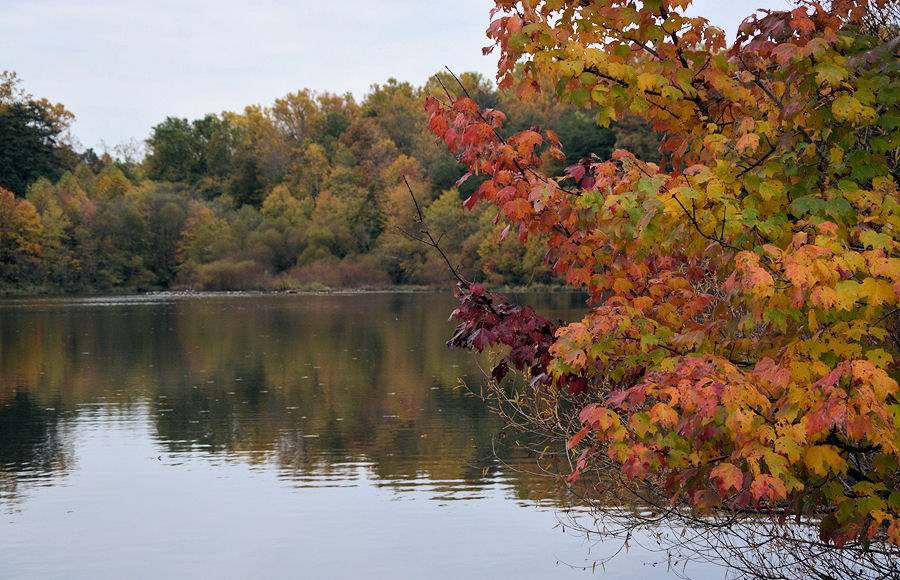 Lake Mercer is a 154-acre park in the south central part of the county just south of the Fairfax County Parkway. This heavily wooded park in Springfield sits between Hooes Road and South Run RECenter. Although the park’s address is 9500 Silverbrook Road, its main entrance is off Hooes Road where there is limited parking for about ten vehicles in a gravel lot on county property below the dam. For GPS purposes, use 8854 Hooes Rd., Fairfax Station, Va., to get to the parking lot. Based on an average walking pace, it is a four-minute, 330-yard uphill hike on a mixed natural/paved path from the parking lot to the lake dam. It’s a fairly large dam. The walk across the top is one-fifth of a mile end-to-end. There are no trashcans, picnicking, playground or restroom facilities. The park features hiking, biking and fishing, and it contains natural and historic areas. There is no public road to the water’s edge and there is no boat ramp, but there are a couple of places where small craft, like canoes, can be launched if you’re willing to carry or wheel them in by hand. No motors are allowed.

The park’s connection to South Run Stream Valley helps make it a rewarding spot for wildlife viewing. Deer, beaver, fox, turtles, squirrels, woodpeckers, heron and other birds are common sightings. So are joggers and dog-walkers. A trail approximately 3.5 miles long encircles the 43-acre lake. Most of the trail is paved except for a three-quarter mile section of natural trail on the north side of the lake. Most of the trail is convenient for both hiking and biking. The trail on the south and west side of the lake is a little hilly. Summer shoreline access to the lake waters is limited by flora.  There is access to the lake area by bike or foot from South Run RECenter and via several other neighborhood trails. Lake Mercer may appear on some maps as Recreation Lake Park. 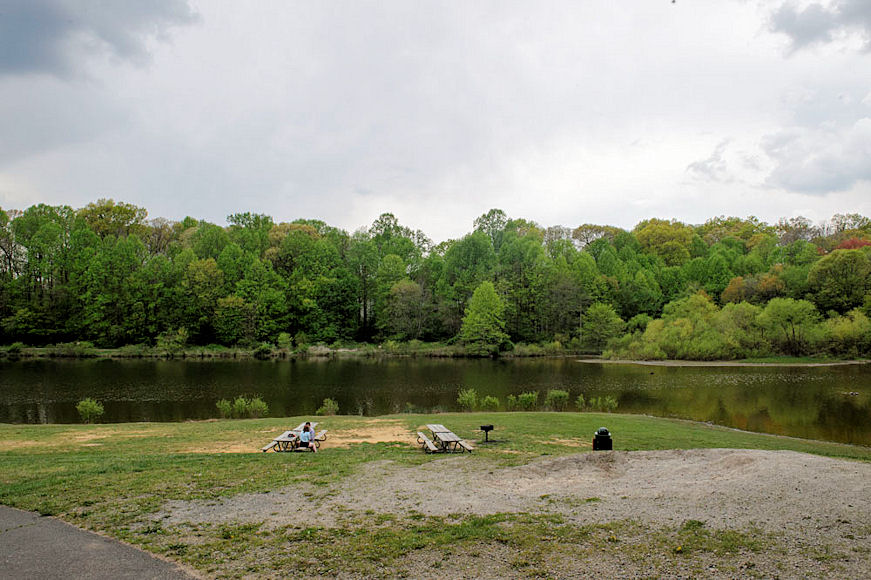 Royal Lake Park is a 46-acre park not far from the intersection of Guinea Road and Burke Road in Fairfax. The park has a J-shaped, 38-acre lake. There are street entries and parking lots at each end of the “J.” The park also is accessible from area hiking trails.

Lakeside Park is near the top of the J at the Pommeroy Drive entrance to Royal Lake, where there are picnic tables, a playground, a basketball court, a multi-purpose athletic field, trashcans and parking. A one and three-quarter mile loop trail around the lake begins from the parking lot. You can stretch that to almost two miles by taking optional side trails, such as hiking along the top of the nearly quarter-mile dam instead of along its base. Bikes are prohibited on the natural-surface trail, which has steep grades in spots, steps, quite a few tree roots, and even a tree or two in the middle of the path. There are a few benches along the trail for a quick rest.

The developed area at Royal Lake Park off Eastlake Drive on the short, northwest wing of the lake’s J-shape includes a parking lot, a playground, a basketball court and tennis courts. The maintenance access road leading to the lake is not available for boat launching. Concerts are held next to the lake in the summer.

There is a small, natural area, and wildlife watchers may see turtles, signs of beaver, squirrels, ducks, geese and other waterfowl.

The 38-acre lake was dredged in 2016. A fish save was conducted at the lake in October 2015 prior to the dredging. Staff relocated juvenile bass and crappie to Brookfield Pond along with a large number of bluegill and redear sunfish.  Lakes Barton and Braddock received all the large game fish along with a considerable number of juveniles and various forage species.

The Park Authority occasionally conducts nature programs at Royal Lake, including campfire programs. The park has a Friends support group – The Friends of Royal Lake.


‌ Note: A paved trail/access road from the accessible parking spaces leads down to the concert venue.  Please note that the slopes vary up to 11%.  Contact County staff on site if assistance is needed or call 703-324-8727 for accommodations in advance of the performance date. 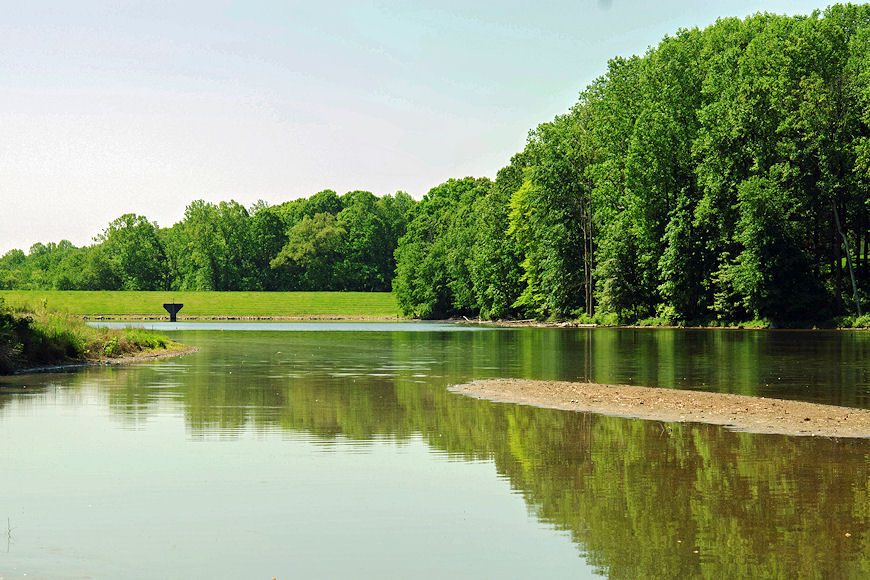 Woodglen Lake Park is a 50-acre park in the Braddock District, between Sideburn Road and Ox Road in Fairfax. There are trails, though there’s no loop trail all the way around the lake, and the shoreline can be hard to reach in places because of flora. Private housing backs up close to the lake in some places, so be sure to stay on the public land near the water. Boating is limited to carry-in craft, and motors are banned. The lake was dredged in 2015, and a forebay was created to make the lake more efficient at trapping sediment. Woodglen drains an area of about 1.16 square miles and has a surface area of about 12.5 acres at normal pool. Public parking for access to the lake is at the end of Fireside Court near the dam. There’s space for only a handful of cars. There’s a paved trail running from there for about two-tenths of a mile across the top of the dam and out of the park on the other side of the dam. There is no public parking at the Zion Drive trail entrance on the upper end of the lake. There are no facilities at the lake.

Biking - Hiking - Fishing - Which parks have which activities?