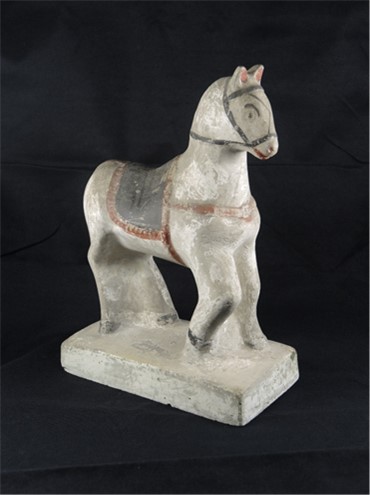 This proud horse figurine is an illustration of American artistic innovation.

This is chalkware, an American term for figures made of plaster of Paris or sculpted gypsum and painted with oils or watercolors. Chalkware was popular in the late 18th to early 20th century, and it continued to be made through the 1960s. Early pieces mimicked more expensive figurines imported from the Staffordshire Potteries in England. To recreate this look, American artists turned to an easily accessible and more affordable material, plaster of Paris, a lightweight and fragile material that could be molded into any shape the artist could imagine. The use of this inexpensive, common material to imitate beautiful sculptures and figurines made fine art more accessible to the general public.

It is hard to find unblemished specimens, as the pieces were rarely glazed. Upon receiving this piece, the Fairfax County Park Authority had it conserved, fixing the small holes and cracks that had developed over time. The horse is now in excellent condition and is a fine example of an object from our Lahey Lost Valley collection.

In 1940, Richard Lahey, the once principal emeritus of the Corcoran School of Art and a well-respected artist and teacher, and his wife, Carlotta Gonzales Lahey, a painter, sculptor, and teacher, bought 45 acres of land in Vienna. A mid-18th century brick hall-parlor house was part of the property. The Laheys added a two-story brick addition and moved a previous wood-framed kitchen addition to become a free-standing artist studio. Richard and Carlotta were important members of their community who truly loved art and Fairfax County. Throughout their lives, they collected interesting historic furniture, folk art, and antiques. Carlotta bequeathed 22 acres of land, the house, and its contents to the Fairfax County Park Authority in memory of Richard. Their beautiful home is now part of the Fairfax County Park Authority’s Resident Curator Program.