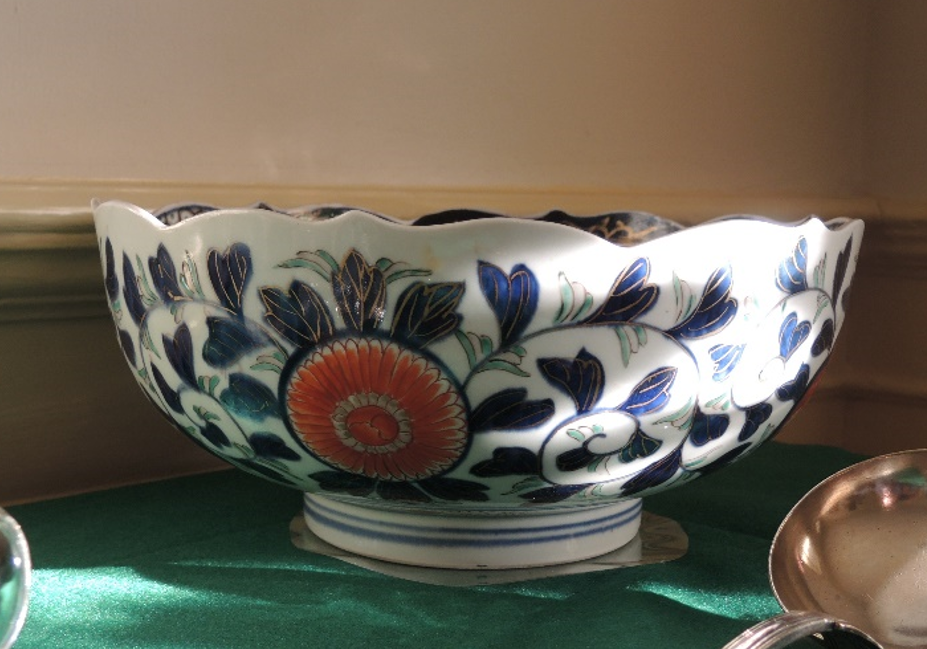 By the 18th century, punch was a popular drink. It was usually made with rum or brandy and expensive imported ingredients like sugar, citrus, and spices. This punch bowl was purchased by the Fairfax County Park Authority in the early 1970s to enhance the interpretation of Sully Historic Site, where it is normally on display.

The decoration on this beautiful punch bowl is known as Imari. Imari porcelain, also known as Imari ware, has a unique background. It was first produced in Japan in the early 1600s. Some say it should really be called Arita ware, as that it where it was produced. Imari was the nearby port from which it was shipped. Arita is known as the birthplace of Japanese ceramics, which began when kaolinite clay was discovered there. The first porcelains were either plain white or white with a blue underglaze. Typical Imari ware was decorated with blue underglaze, then accented with terracotta red and gold and sometimes outlined in black. Later, other colors like green, yellow and purple were added.

Imari ware was exported to Europe from the Dutch East India Company. In the mid-18th century, shipments to Europe all but ended as China had begun to produce its own version at a much cheaper cost. European potteries like Meissen and Spode also began imitating the Imari style. However, Japan began exporting it again in the late 19th century when the influence of Japanese art and design became popular across Europe. This piece dates to that time period, around 1875. Even now this design aesthetic is a favorite with collectors, and some factories still produce Imari patterns.