Newspaper Provides Insight into Past Residents of Green Spring 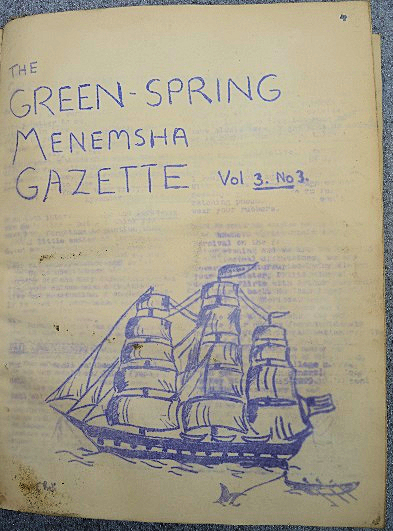 Michael Straight (1916-2004), a former owner of the land that is Green Spring Gardens, wore many hats throughout his lifetime - painter, author, deputy chairman of the National Endowment for the Arts, State Department economist, editor and publisher of The New Republic, and more.

Two of his passions, writing and publishing, inspired his children and the children of family friends to create their own publication called the “Green-Spring Menemsha Gazette.” It was considered a family newspaper. The children wrote and published it during summer vacations to Menemsha, a small fishing village on Martha’s Vineyard. The third volume of the Gazette was found on Fairfax County Park Authority property in 1975 and remains in park collections today. This volume contains a “Meet the Staff” section written by 14-year-old Cheli. It describes the personalities, hobbies, and roles of the staff, including 12-year-old David, the editor, and permanent contributors Susie, Lucy, Dina, Mikey and Jane. Contents include typed interviews, opinion pieces, special announcements, and stories such as “The Case of the Poisoning Plumber.” Sketches drawn by the staff bring more life to the articles. The volume was dedicated to their inspiration, Michael Straight.

Full of trees, vines, perennials, bulbs, vegetables and more, Green Spring Gardens in Alexandria, Va., is an inspiration to any gardener. The brick house on the property was built during the ownership of John Moss in 1784. However, it was not until the 1940s, during the ownership of Michael and Belinda Straight, that the site’s gardens that were originally designed by Beatrix Farrand were developed. It was the Straights who deeded the property to the Fairfax County Park Authority in 1970. Since then, the county has purchased an additional 11 acres to further expand the gardens.