The Purpose of Fire Screens 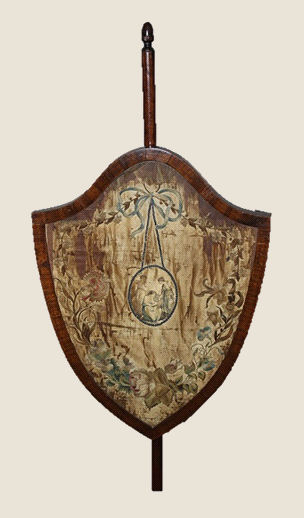 Fire screens shielded people from the light, glare and heat of a log fire, which could be intense for those seated close to a fireplace. The screens were made of wood (mahogany), glass, and/or brass and could be used to display needlework or paintings. Those with elaborate ornamentation could be covered with glass to protect the satin, silk, velvet or wool artwork. They could be round, oval, rectangular or shaped like a shield, and some had small shelves mounted below the screen. A fire screen such as this one, called a pole screen, could be attached to a pole and possibly lowered or raised to match the needs of the user.

This photo depicts a fire screen at Sully Historic Site in Chantilly. It’s not original to Sully, but was donated to the site in 1985 as an artifact to help interpret how people lived in the early 19th century. Records indicate it is made of walnut and pine framing a silk screen that is protected by glass. It is English, of Hepplewhite style (George Hepplewhite was a London cabinetmaker in the 1700s), and likely was made in the early 19th century.