Glass Beads Provide Connection to Our Past

Glass beads come in many shapes and sizes, and occasionally are found on Fairfax County archaeological sites. These small artifacts can be an exciting, and often rare, find since they can be difficult to spot. Beads are not commonly found in the field. Instead, small artifacts like beads are found through careful combing of sediment that has been collected, water-processed through fine mesh, cleaned of excess dirt, and then dried. 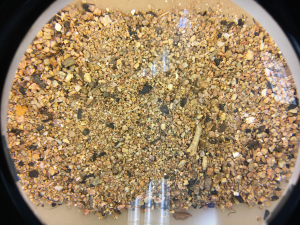 Dried Sediment Ready to be Examined

Glass beads can be as small as 0.5 millimeters and come in a variety of colors -- green, blue, pink, white, black and clear. A large number of beads were exported from Europe to America for trade, decoration and adornment. From the 16th through 19th centuries, bead production was a major industry in several European countries and city-states, in particular Venice. The context at the site in which beads are found often tells archeologists who used the beads. In Fairfax County, before approximately 1700, beads most often are associated with Native American consumers. After this date, some researchers consider glass beads one indicator of the presence of enslaved African-Americans. Though tiny, or perhaps because of their size, when archaeologists find glass beads they often feel a connection to the original user. 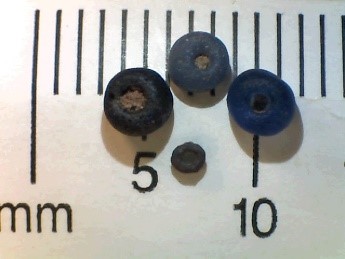 For more information about artifacts and current excavations around Fairfax County, see https://cartarchaeology.wordpress.com