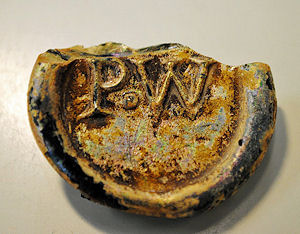 It looked like just a broken piece of glass lying in the ground. But there was more to it.

Two and a-half centuries after it was shaped and filled we have a pretty good idea of what was in it and who owned it.

In 2011, the Colchester Archaeological Research Team (CART) recovered this olive green bottle seal. It was resting just above an intact pit feature at the cemetery in Old Colchester Park and Preserve.

The seal bears the initials "P.W." That tells us a lot. The seal means it was a wine bottle, and the initials lead us 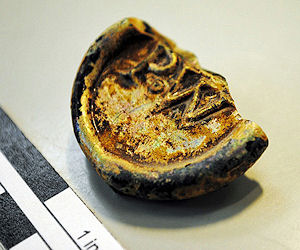 to suspect it belonged to Peter Wagener, a one-time owner of properties near the archaeological excavation, including the land that was developed into the Town of Colchester. Wagener purchased the Mason Neck land in 1748. He died, still with interests in Colchester, in 1798.

Wine bottle seals were popular throughout Great Britain and its colonies from the mid -17th through the late 19th centuries. Custom-made seals, like this one, were placed on wine bottles by adding a glob of glass to the still-warm bottle and impressing a mark into the glob to create a seal. The seals were a mark of wealth among the elite and were made for gentlemen, but have also been found associated with merchants and tavern keepers.