This plate was used at the Great Falls Grange. Its story began in October 1920, when 29 men and women applied to the National Grange of the Order of Patrons of Husbandry to organize the Great Falls Grange #738. They were bidding to join an organization that promoted and protected agricultural and community interests on the local and national political stage.

The group in Great Falls initially met in a small schoolhouse before moving to Forestville School. In November 1927, the Great Falls Grange purchased eight acres from Gilbert and Frances Gunnell to build the local organization’s own grange hall. Work began in the spring of 1928 and was completed in March 1929. While primarily used to hold Grange meetings, Grange Halls often became a central place for local community gatherings and events. To fulfil that role, the Grange needed to be equipped with a kitchen and sets of tables, chairs, and kitchen and tableware that could be housed at the Grange.

This plate was donated to the Park Authority in 2013, along with other items from the Grange. While rather plain and straightforward in design, the label “P. of H.” (Patrons of Husbandry) boldly stands out. The back of the plate is marked “SCAMMELL’S TRENTON CHINA” and indicates it was manufactured by Scammell China Co., which operated out of Trenton, New Jersey.

In 1923, D. William Scammell and his five brothers purchased the Lamberton Works, a pottery which had been operating since 1869. While the Lamberton Works produced domestic and commercial china, Scammell expanded his clientele to include hotels and restaurants. The company had offices and a showroom in New York City, and staff traveled to hotel and restaurant industry trade shows with catalogs and physical samples, and sometimes even conducted demonstrations where potential clients could watch as pieces were decorated. Prominent customers included the Waldorf-Astoria Hotel and Macy’s Department Store. Their wares were also popular with travel companies including the Union Pacific and Baltimore and Ohio railroads and the Holland-America cruise line. D. William Scammel died in 1952, and the company closed in 1954. 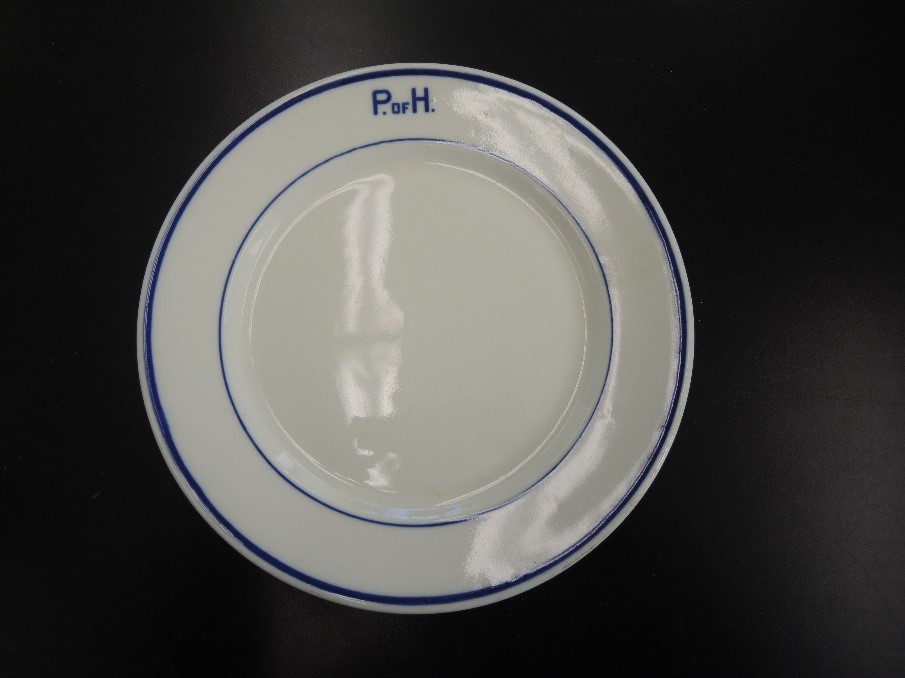