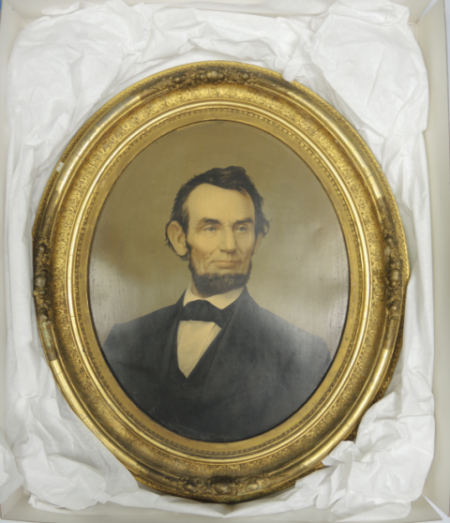 This portrait of Abraham Lincoln, our sixteenth president, is part of the Fairfax County Park Authority’s Museum Collection. It was donated to the Park Authority by a descendant of the Shear family. The Shear family lived at Sully from 1874 to 1910, and it’s believed the portrait hung in Sully’s parlor during that time. Alonzo Shear fought for the Union Army during the Civil War.

Although it is unknown when the Shears acquired this portrait, the back of the portrait states the image was copyrighted in 1865, though the print had been in production since 1863. Lincoln’s image was a familiar sight in many homes, especially after his death, when demand for his portrait increased among the American public.

The portrait is a chromolithograph and was printed by E. C. Middleton & Co. in Cincinnati, Ohio. The company was a pioneer in using this method of production. Chromolithography is a unique chemical process that produces multi-colored prints using lithographic stones to put oil inks on paper, which can then be mounted to canvas and outfitted in a frame. The result imitates the look of real oil paintings. Because of its affordability, chromolithography became a popular method of distributing portraits of famous individuals. This portrait appears to be in its original decorative wood frame which was covered with gesso, a mixture of glue, chalk, and water, and then gilded.

Although Sully Historic Site is interpreted to the time period that the Lee family lived there in the late 18th and early 19th century, the next time you visit Sully, imagine how this portrait of Lincoln would look hanging on the wall.