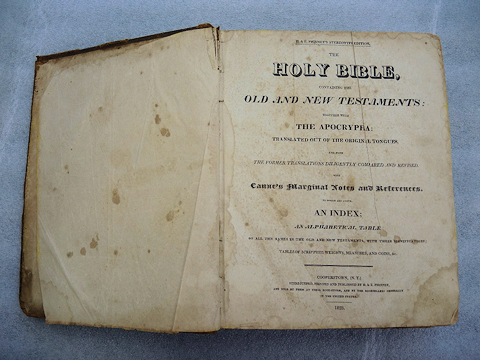 This Bible was donated to the Fairfax County Park Authority in 1984. According to the donor, it was used in the Frying Pan Meeting House until a rift over doctrine caused several members to withdraw from the church in 1889.

The book was published in 1828 by H. & E. Phinney’s in Cooperstown, New York. Henry and Elihu Phinney had printed their first full version of the Bible in 1822. This 1828 version is well-known because Joseph Smith, organizer of the Church of Latter-day Saints (Mormons), used it to craft his new translation of the Bible.

Pressed within the pages of this book are some ferns. A note from the donor inside the Bible states that the ferns had been placed there “at least 80 years ago” by the donor’s aunt, “Em” Cockerille. Church Minute Books show that several members of the Cockerille (sometimes spelled Cockerill) family withdrew from the church throughout 1890-1891.

The Bible measures 9 by 11 inches closed, which is referred to as quarto-sized in book publishing. This size would typically have been considered a family Bible size, not a pulpit copy. It was marketed as a stereotype edition. Traditionally, books would be typeset by hand, letter by letter, page by page. This was a huge investment in time and resources. One quarto-size Bible page would need over 6,500 pieces of type. In stereotyping, a page would be typeset only once, a mold would be made, and then a metal plate containing the entire page would be cast from the mold to use for future printings. This reduced the expense of materials and labor, made the process faster, and decreased the chance for errors, ultimately allowing more people to own personal copies of books like the Bible.

The 1984 donation of this Bible to the Park Authority came in the same year that Arthur L. Carter, the last remaining trustee of the Frying Pan Meeting House, deeded the building to the agency to preserve and maintain the property.