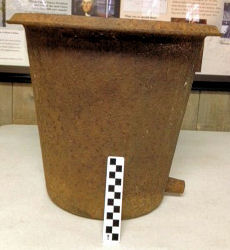 'Twas a bewildering way to regain a piece of the site's history.

Many years ago, in the dead of night, someone left a tilted pot at Colvin Run Mill Historic Site. With it was a note that read: “This object, whatever it is, was removed from here over 20 years ago. NOW RETURNED.??

The pot is metal with a spout on one side at the bottom. The inside is covered in enamel, the outside is rusty, and there is a hole in the bottom. That bottom is not flat, but rounded, so that the object doesn’t stand on its own. 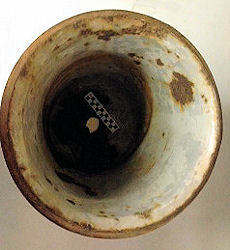 The most promising idea is that this is part of an illegal moonshine still. That would make sense. It’s easier to carry corn in a jar than in a heavy sack. Grain, especially ground corn, is an integral part of making moonshine, and tradition says a still was found at Colvin Run around 1970 when restoration work on the mill began.

We have contacted many museum professionals across the country, uploading photographs and descriptions of the item to email listservs and asking what people think it might be. We were directed to curator Melody Worthington from the Tobacco Farm Life Museum in North Carolina. That museum and restored homestead preserve the history and cultural heritage of eastern North Carolina. The site includes living history demonstrations of traditional tobacco farm life at the turn of the 20th century. Melody conferred with colleagues, and they agreed that it is probably a moonshiner’s “mash pot.??

The hole in the bottom is most likely from where the pot was held over the heat source. The coating on the inside assured that the flavor or quality of the moonshine was not affected by the metal pot. The bottom spout would be used to drain out liquid and spent mash when the distilling process was completed. There would be another object on top of this bucket that would trap the alcohol vapors rising out of the soupy mash concoction. The vapor would be then funneled into a “worm,?? a coiled piece of metal that would be cooled by running water (another valuable and accessible resource at a mill). That would cause the alcohol vapor to condense into liquid. The alcohol then could be either collected in containers or distilled again by running it through a “thumper barrel,?? which is a heated barrel that would trap the vapor.

And a mystery is likely unraveled. With that, we raise a glass of thanks to the unknown person who returned a piece of history to Colvin Run Mill.