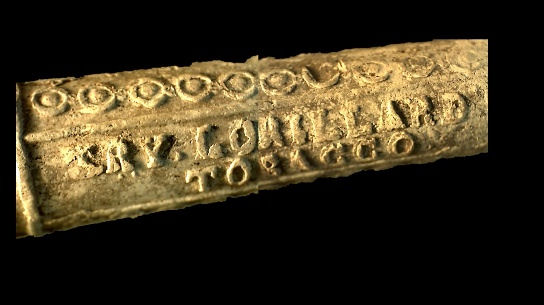 One of the most intriguing artifacts from Ellanor C. Lawrence Park is a decorated pipe stem with lettering that was found during excavations near the park's visitor center.

Unfortunately, the lettering was faded to the point where it seemed impossible to discern, but once photographed under a microscope camera, the words could be determined. One side says, "TRY LORILLARDS TOBACCO," and the other bears the address "16.18.20 CHAMBERS ST."

This is an address in New York City where the Lorillard Tobacco Company operated a retail location selling tobacco products out of stores at 16, 18, and 20 Chambers Street. The company was in business from 1760 until it was purchased by Reynolds American in 2015, making it the longest-running tobacco company in the country.

Check out other information about artifacts and current excavations around Fairfax County at cartarchaeology.wordpress.com.