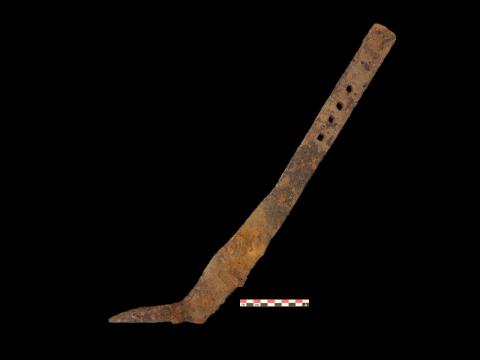 When archaeologists work at historic sites occupied after the arrival of Europeans in the Americas, it is not uncommon for them to come across large pieces of metal. When one of these pieces cannot be immediately identified, the default ID is usually “plow part.” Sometimes, it actually is a plow part!

During recent excavations of a circa 1760 to 1820 slave quarters site on Patriot Park North, Fairfax County Park Authority (FCPA) archaeologists recovered this bar-like, cast metal artifact with holes that appeared to allow for some kind of adjustments. One of the agency’s amazing volunteers researched the object and discovered it was called a “coulter.” The coulter would have been vertically mounted to cut into the ground before a plow separated the dirt, creating a deeper cut with less effort than other designs.

The late 1700s and early 1800s witnessed an explosion in agricultural experimentation and innovation. Regional farmers sought to maximize yields through practices like crop rotation and used improved implements to better work the local, piedmont clay soils. In 1794, Thomas Jefferson received the patent for the pictured moldboard plow.

This design utilized a coulter similar to the one found during the FCPA excavations. Inventions such as these were especially welcome in the Virginia piedmont where attempts at tobacco cultivation had depleted soils and farmers looked for other crops to remain economically viable. Artifacts such as the coulter reflect this broad change and speak to the daily labors of enslaved persons in Fairfax County.

For more information about artifacts and current excavations around Fairfax County, see https://cartarchaeology.wordpress.com