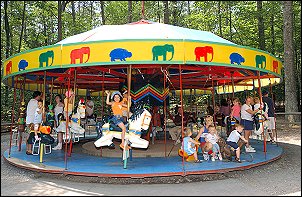 1The after-hour/season hourly rental fee is applied in addition to the established per person ride fee for rentals occurring during non-operating hours/season.

The Train Station opens for ticket sales at 11:00 am during the season. Please note ticket sales may end early on special event days due to high demand. 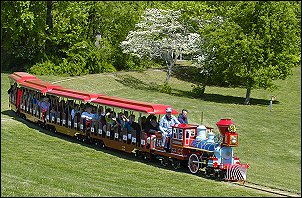 Since 1967, the miniature Central Pacific Huntington steam engine chugged over the tracks at Burke Lake Park, carrying kids who grew up and returned to bring their own children back for a ride on this community landmark.

In 2005, the little engine that could was retired, and now a new version of the one-third-scale replica C.P.Huntington is making the rounds.

The new locomotive looks the same but technology has made advances in the design of miniature trains. This model gets diagnostic tests performed by laptop computer, it boasts an automatic sander, it's quieter and the improved gas mileage is a driver's dream - 26 runs, almost continuously throughout the day, on just four gallons of gas.

The ride over 1.75 miles of track takes 10 minutes and reaches speeds of 10 to 12 miles per hour. And after the chug-along, there's more old fashioned fun to sample - a spin on the carousel, a hand-dipped cone at the Ice Cream Parlor and a walk on the park trail rated one of the 10 best urban fitness trails in the nation by the American Hiking Society.