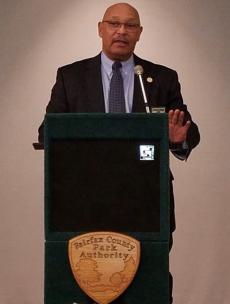 Park Authority Board Chairman William G. Bouie joined the Park Authority in 2005.  He has served as Chairman of the Board since 2009.  Mr. Bouie is currently the President and CEO of Sky Communications Inc. He is an active volunteer involved in civic organizations.

Well-known for his work with youth in the Northern Virginia area, Mr. Bouie remains active and involved. He served as the President of Reston Youth Baseball, assistant district administrator for Little League Baseball of Northern Virginia, was the Northern Virginia Little League Volunteer of the Year. He  was selected to serve on Project Gold , a committee of the United States Olympic Committee. He is a nationally ranked racquetball player, and the three-time defending Senior Olympic Gold Medalist.

Born and raised in Detroit, Mr. Bouie received his bachelor's degree in political science from Western Michigan University and his master's degree in business management from Central Michigan University. He has provided consulting services to major vendors in the telecommunications industry and has served as an expert witness for various government organizations.

He and his wife Regina live in Reston, Virginia.